The defining feature of the energy transition

DNV GL’s Energy Transition Outlook team predict that global energy demand is likely to flatten, if not peak, by 2050. The greatest driver of that historical watershed will be the often-overlooked hero of the transition: energy efficiency.

Director of the Energy Transition research programme in DNV GL and Project Director for DNV GL’s Energy Transition Outlook. He has a Master’s degree from NTNU in Norway and 20 years’ experience working in DNV GL, mainly within the Maritime and Energy sector.

Imagine spending hard-earned money on liquid fuel for lighting your home, and then pouring most of it away. That is effectively what hundreds of millions of people do worldwide with kerosene lanterns. Typically, as little as 2% of the energy intrinsic to kerosene is converted to light when it is burned in a lantern with a wick; the rest is lost as mostly useless heat.

That scale of inefficiency explains why the world’s unelectrified poor spend from 50 to well over 100 times more per unit of light than do people who are grid-connected1. It also explains why the off-grid solar products market is growing rapidly. This market exceeded USD 1 billion for the first time in 2016, in over 100 countries with some 30 million devices ranging from simple Light Emitting Diode (LED) lanterns costing a few dollars to more elaborate 100+ Watt solar home systems capable of charging cell phones and powering TVs and fans.2

The transformative effects of such off-grid solar products are profound, both economically and in terms of health and planetary benefits. Yet, that is just one example of energy efficiency defining a new age in energy use. Efficiency gains are being made everywhere, from the flight patterns of modern aircraft to the manufacturing of microchips. In fact, as we project in our Energy Transition Outlook, the energy intensity of the global economy (i.e. the energy used per unit of economic output) will improve more quickly than the rate of global economic growth in the next three decades. As a result, global energy demand will flatten for the first time in our post-industrial history. 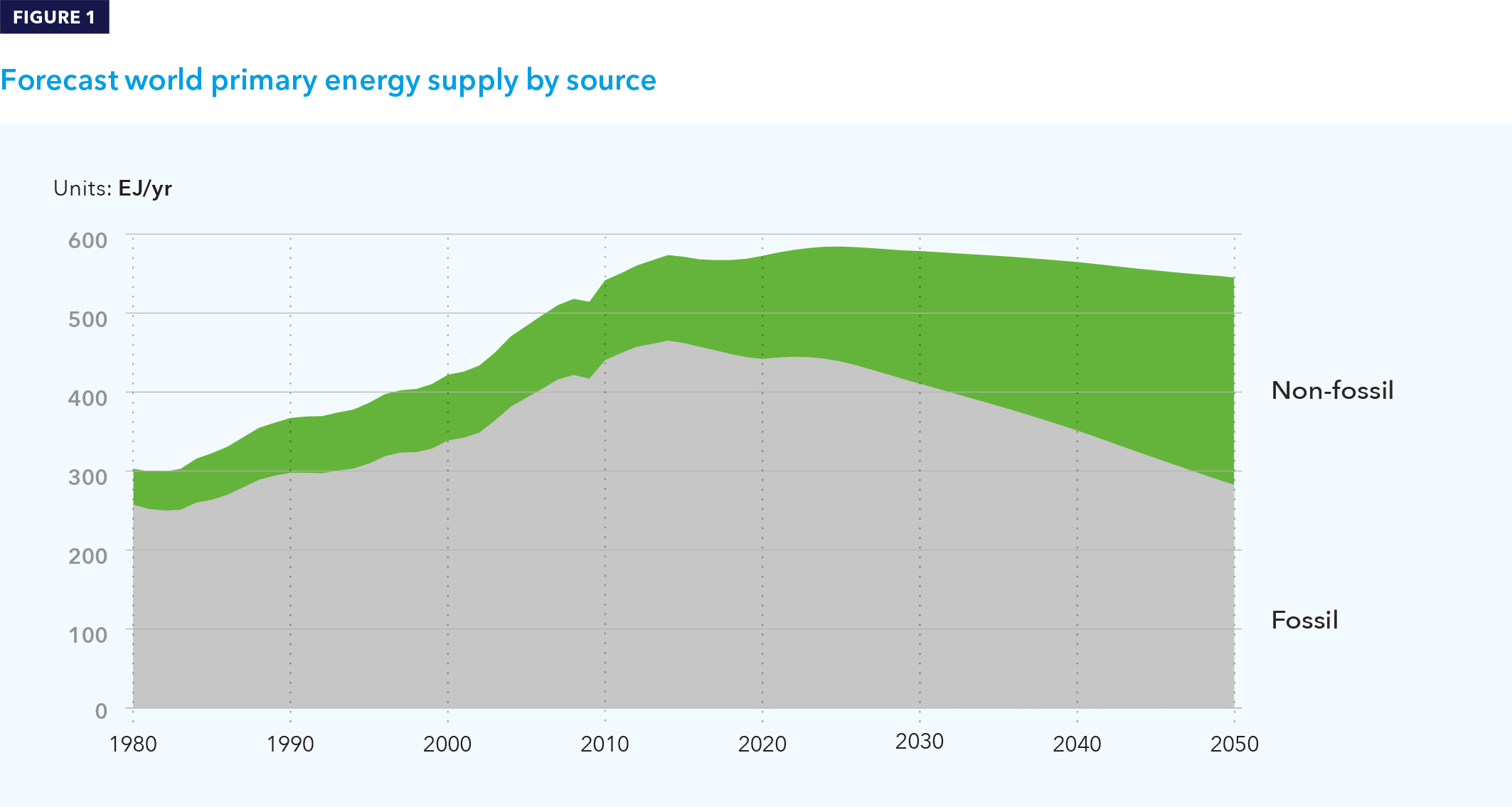 The world’s annual efficiency gains play a far greater role in helping to cut emissions over the coming two decades than the combined contribution of the switch to wind, solar and electric vehicles.

There is no doubt that energy efficiency is the star player in the line-up driving the energy transition. In DNV GL’s Energy Transition Outlook, we see the world’s annual efficiency gains playing a greater role in helping to cut emissions over the coming two decades than the combined contribution of the switch to wind, solar and electric vehicles.

The central importance of energy efficiency – or, more accurately, the need to reduce the energy intensity of the world’s economic activity – is recognized in the Sustainable Development Goals framework (target 7.3 aims for a doubling of the rate of improvement in global energy efficiency by 2030). In our Outlook, we predict an annual average 2.5% improvement in the world’s energy intensity (between 2015 and 2050), and show this to be the most important factor for reducing overall energy-related CO2 emissions to around half the present level by 2050.

Without the combined effect of billions of incremental steps towards a more efficient energy future, our global community has almost no chance of meeting the Paris Agreement target to keep average global warming well below 2 ⁰C and strive towards 1.5 ⁰C. Even so, energy efficiency is not in its own right the silver bullet for a safer plant. A combination of interventions is needed, including the rapid deployment of renewables, carbon pricing, negative emissions technologies, and possibly an expanded role for hydrogen.

Nevertheless, it is the invisible, intangible phenomenon of energy not used that is the most dramatic feature of the transition unfolding today. And that is a difficult concept to grasp, because our innate cognitive bias will try to convince us that it is the vast solar parks and the great powerlines that are spearheading the transition. Our brains are not wired to calculate the enormity of the combined effect of Nigerian high school students studying under LED lighting, or the aerodynamic improvements measured in microns effected by a German automaker.

The four most important enablers of energy efficiency are:

Despite such powerful drivers and enablers, progress towards greater energy efficiency is hindered by political and societal barriers such as lock-in and inertia; reactive and short-term thinking; existing energy subsidies; and concern over job security.

Energy efficiency can be defined as the ratio between the useful output and input of an energy conversion process, as is the case with turning sunlight, wind, gas and liquid fuels into electric power, heat or light.

Scaling up from a single kerosene lamp to a whole country, the energy efficiency of a nation's economy is described as its energy intensity. This is calculated as units of energy per unit of GDP.

Historically, energy intensity has improved 1.4% per year over the last two decades, with a sharply higher improvement in the last five years, as shown in Table 1.

Efficiency gains are forecast to continue, as shown in Figure 2. DNV GL forecasts annual    improvements in energy intensity of between 2% and 3% until mid-century. In 2015, it took 7.1 Megajoules (MJ) (or about 2 kilowatt hours (kWh)), of energy to create one US dollar of global GDP. In 2050, the equivalent figure will be only 2.9 MJ (which is less than 1 kWh) – a 59% reduction over 35 years.

One big reason for this forecast is that the share of the world’s energy delivered by electricity is due to rise from its current level of 18% of energy demand to 40% in 2050. In a more electrified world energy system, efficiency is higher and energy losses lower, simply because electric processes have smaller losses than their non-electric alternatives. Further, as the renewable share in electricity accelerates, energy intensity benefits from there being lower losses in power generation from renewables than from fossil fuels.

All sectors and regions across the world are experiencing improved energy efficiency, albeit at different speeds. China has improved most, while, sector-wise, transport shows the largest improvement. Continued developments in technology, and new regulations and business models, are contributing to efficiency improvements in many areas, from shipping to manufactured goods – as shown in Table 2.

In our current outlook for the global energy transition, DNV GL forecasts energy intensity for 10 global regions, looking at the energy used to produce a dollar of GDP. This is illustrated in Figure 3. Currently, Europe is three times more efficient in this regard as region North East Eurasia (Russia and neighbours), at the other end of the energy intensity ranking. In the next three decades, energy intensity will improve in all regions, but the differences between them will remain. In 2050, the three most efficient regions will be Europe, Latin America and South East Asia.

Turning waste into wealth is a multi-trillion-dollar opportunity globally.4 But the pursuit of energy efficiency goes beyond an economic imperative; it is also a matter of survival. Even a sustained 5% annual reduction in energy intensity – double our DNV GL forecast – would NOT result in global energy use being low enough to meet the 2 °C target from the Paris Agreement, let alone the 1.5 °C target. While energy efficiency is the quiet revolution underpinning the energy transition, it is not sufficient in its own right to secure the future we want. A mix of technical and policy solutions is needed, as we explain in greater depth in our Energy Transition Outlook.

Energy use per person

In the future, humanity will make much smarter use of energy. With significant energy intensity improvements, global energy use will level off even as the population continues to increase.

An example of how the average energy use per person will reduce is shown by the following: The average European consumed 135 Gigajoules of energy per year (GJ/yr) in 2015. In 2050, this will have reduced to 76 GJ/yr. With prosperity in Europe likely to remain relatively stable, this example illustrates how a relatively high standard of living can be maintained while reducing energy use, and how energy efficiency ensures we get more out of the resources we use. 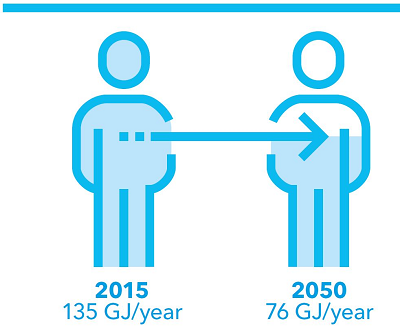 Energy efficiency gains will also be made in other world regions, and not least in developing countries.

In the 2018 edition of our Energy Transition Outlook (to be published in the fourth quarter of this year) we will further explore what this means in terms of energy affordability and access.  However, we can already state that, in terms of our outlook, important aspects of Sustainable Development Goal (SDG) #7 will be achieved.

Understand how the energy transition will unfold